Yama, the ancient God of death and darkness, noticed the human leaders in their war against the Gods with great interest. He had learned from Nephron that these humans were the creation of the Goddess Lunia, and that they had come to this ancient age from the future and were using the power of their creator. Picking up this idea, Yama combined his own power with the soul of Eir in the abysses of darkness and created a new soul. Afterwards, he put this new soul in a magic bottle and gave it to Nephron, saying, "Even if we are defeated and sealed, this soul will command my dark creations and be the key that unseals us." Nephron returned to the present and poured this soul into a figurine he had created. He quietly said to himself, "Finally... the dark princess was born... muahaha..."

Dark Eir can best be described as a hybrid character, capable of damage dealing, healing, and surviving. With a variety of offensive skills, ranging from close combat to medium ranged, and comboing skills as well as bossing skills, she is also a versatile character. However, she does not excel in any one area.

Dark Eir is one of the best healers, second only to Eir. Her party buffs are powerful but costly, and gradually drain the party's health. 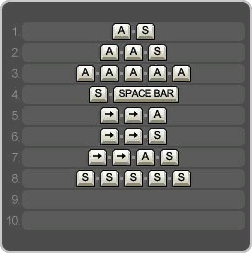 A Dark Eir with a +7 weapon in the Pisces square.

A Dark Eir with a full Gillian's The Strongest Set and a Ranked Challenge Aura.

A Dark Eir with a full Lunia Set and a Ranked Challenge Aura.

A Dark Eir with a Flying Temple Weapon V in the Aquarius square.
Add a photo to this gallery

Retrieved from "https://eternal-lunia.fandom.com/wiki/Dark_Eir?oldid=2123"
Community content is available under CC-BY-SA unless otherwise noted.