Many millennia ago, the dragonkin ruled the world alongside the ancient gods. However, the gods disappeared from the world during a time of trouble and so Gaon, a powerful dragon who embraced the 'power of chaos' and was therefore able to wield lightning at will, went into a deep slumber. At long last, Nephron found and revived the ancient gods, unknowingly waking Gaon. But when Gaon woke up, he found that he was denied his powers and unable to revert to his original form. Gaon, in human form, began to travel the land to find out what happened during his slumber. Through random encounters with Sieg's party and the goddess Lunia, Gaon learns that part of the answer he seeks is that the 'power of chaos' disappeared long ago while he slept, and that this is the reason why he cannot revert to his true form. With this knowledge, Gaon joins Sieg and his party in the present day to seek out Nephron and find the whereabouts of the 'power of chaos'. Gaon's journey to regain his power thus begins. 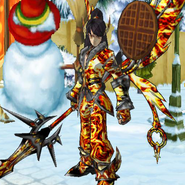 A Gaon with the Infernal Ruler's Set and a Burnt Waffle Sign (Back).
Add a photo to this gallery

Retrieved from "https://eternal-lunia.fandom.com/wiki/Gaon?oldid=2339"
Community content is available under CC-BY-SA unless otherwise noted.