Sieg happened to rescue a Slime that was dying of poison. Eir, who loves Slimes, named it "Lime" and raised it like a pet. After following Eir everywhere she went, Lime eventually joined Sieg for an adventure. The true power of this slow, weak Slime comes from its various transformations and its ability to generate different potions. This character is a very helpful support member, especially for party playing.

Lime is a combat slime. He can transform into various types of slimes, each with different attacks. He can also spit out various potions with beneficial effects for himself or his party. 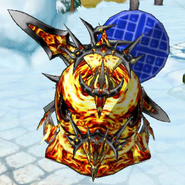 A Lime with the Infernal Ruler's Set and a Blue Waffle Sign (Back). 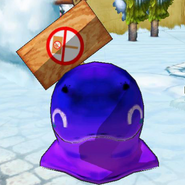 A Lime with Lime's Transforming Color-inverting Body and a No 'No Signs' Sign (Back), in his normal form.

A Lime with a full Set of Elven Fairy I.
Add a photo to this gallery

Retrieved from "https://eternal-lunia.fandom.com/wiki/Lime?oldid=2372"
Community content is available under CC-BY-SA unless otherwise noted.